On October 24th the 2020 Walk to End Alzheimer’s will be held in York, PA with the goal of raising $212,000 locally to be used for Alzheimer’s care, support, research and ultimately, a cure.

For us, this disease is personal. It has taken the life of Rita’s mother and also a member of the Penn-Mar family, Erin, who we had the honor of supporting before she died in 2015 surrounded by her adoring housemates and staff.

Erin has inspired us to learn more about this disease and how it disproportionately affects people with Down syndrome. Education is the only control we have over it and we have embraced it with a passion borne from loss and sorrow.

Alzheimer’s is now classified as an epidemic. It is the sixth leading cause of death in the U.S. More than 5 million Americans are currently living with the disease, the most common form of dementia characterized by loss of memory and at least one other cognitive skill. 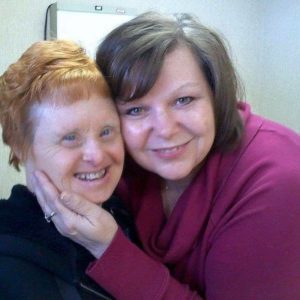 And while people with intellectual and developmental disabilities develop Alzheimer’s at rates similar to older adults in the general population, adults with Down syndrome, like Erin, develop the disease at greater rates: 10-25% between ages 40-49; 20-50% between ages 50-59, and 60-75% older than age 60.

Erin, with her fiery red hair and a personality to match, was in her early 40s when she was first diagnosed with dementia. It would take 10 more years for more serious symptoms to become apparent.

After ruling out the many issues that can cause confusion and memory problems, it was clear Erin did in fact have Alzheimer’s. The disease progressed quickly.

Along the way we found ourselves reacting to each phase of her decline, wishing we had more information and resources to draw from.

To accommodate her we made physical adaptations to the house including a second floor emergency evacuation chair, auto lights for her bedroom, installed railings on the toilet and hallways, and adhered bright pink tape on steps to prevent falls.

Erin was definitely the home’s matriarch and she was adored by her housemates Lesha, Bobbi, and Patty. We tried to be honest with them about the seriousness of the disease and did ask for their help in making her more comfortable. We so wanted to protect them from hurt, but we came to realize that they should be able to feel the emotion and experience if they were capable of handling it.

When Erin stopped crocheting with the ladies in the living room, feeling safer isolated in her bedroom, the ladies brought their crocheting circle to her, sitting around her bed sharing the day’s news.

During Erin’s last days in hospice care, we all gave her permission to “go.” But she hung on stubbornly until her best friend Lesha held her hand, told her she loved her, and assured her that she, Bobbi, and Patty would be OK. Only then did she pass away quietly.

This heartbreaking experience galvanized us to learn more about this horrific disease. With Penn-Mar’s blessing we attended a week-long “train the trainer” seminar in New York sponsored by the National Task Group for Dementia Capable Care for Adults with Intellectual Disabilities. We have since become Certified Regional Trainers by this organization.

At Penn-Mar we are now Dementia Live Coaches, consulting and taking workshop participants through the experience of having Alzheimer’s. We challenge them to hear over loud noises in headphones and solve a series of memory instructions that leave many completely frustrated and defeated. We tell Erin’s story at every session, keeping her memory alive for the valuable contributions she has made to this community.

Going through Career Ladders training to improve our skills and earn professional credentials also made us think outside the box and begin to ask the people we support to describe the dreams they had for their lives.

Bobbi expressed a desire to publish a book which ultimately became a cookbook called “Bon Appetite by Bobbi. She dedicated the book to her friend Erin and donated sale proceeds of over $2000 to the Alzheimer’s Association.

Alzheimer’s is confusing, scary and disorienting. We are committed to learning more about this disease to find ways to provide comfort and safety for the people we support. This experience with Erin taught us to “be in the moment,” helping all involved to treasure and celebrate the good times and know that they are not alone in the bad.

We still have pictures of Erin everywhere in our home and her housemates talk about her all the time. They often look at us with tears in their eyes and say, “I really miss Erin.”