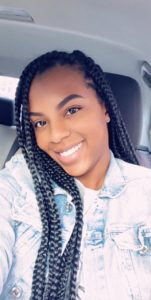 Shai’Vone Harrison, an Awake Overnight Direct Support Professional (DSP) has been in the field for five years, two of them at Penn-Mar. She’s also a mom of two boys, ages 2 and 6, a full-time nursing student, and a Career Ladders participant (more on that in a bit . . .).

Suffice it to say, Shai’Vone is actually Wonder Woman.

Her first foray into direct support began when she got a job working in an assisted living home. She worked for various assisted living organizations, and while she loved being able to help people, she soon realized that she wanted more. “The assisted living homes were great, but I wanted a job where I could interact with people more; I wanted to support people in more significant ways. As a DSP, I can encourage things, but ultimately people get to make their own choices, even if that means there are personal consequences. My job is to support people in achieving their own goals.”

To those who know her, Shai’Vone’s drive to make the world a better place comes as no surprise. “I grew up with a lot of nurses. My mom’s a nurse. My aunts are nurses. I was always raised to help wherever I can, to care about people, and to just be passionate about whatever I do. I think the way I grew up is why I’m drawn to this work.”

When she’s not busy being a mom and a DSP, Shai’Vone somehow finds time to pursue her own nursing degree. She’s thankful that her classes are online, and notes that, “Eventually I’d like to study pediatrics, but that’s a long way off!”

Despite her mind-boggling schedule, Shai’Vone’s supervisor encouraged her to participate in Penn-Mar’s Career Ladders program, which provides nationally credentialed training and certification, and commensurate wage enhancements, to exceptional DSPs. The Career Ladders program is funded by the Penn-Mar Foundation and is made possible thanks to the Michael James Pitts Endowment for the Advancement of Direct Support Professionals.

“I was worried about saying yes. I know the program costs Penn-Mar money and if I committed to doing it, I wanted to do it well. I didn’t know if I would have the time. But my supervisor, Denise [Tomlin], was really encouraging. She kept saying to me, ‘I think you’d be really good at this program.’”

Rising to the Challenge

Thankfully, Denise’s encouragement won out, and Shai’Vone enrolled in Career Ladders. She is now a certified DSP-2, with only one more of the three levels to go.

“When I first started the program, it was really tough. I struggled a lot with my DSP-1. There is a lot you learn after doing the first level. Words really matter and I had to figure out how express what I was thinking effectively.”

Of course, in true Shai’Vone style, she quickly conquered those challenges and tackled her DSP-2. She credits her mentor, Kelly Fry, as helping to get her over the hump.

Shai’Vone did so well with her DSP-2 coursework that the reviewers from the National Alliance for Direct Support Professionals reached out to congratulate her on some of her submissions. “I was so surprised,” said Shai’Vone. “I just started getting some feedback from the reviewers and it was all so positive.”

One of her favorite components of the Career Ladders program was a section on coping with stress as a DSP. “This job can be really stressful sometimes. A lot of people think my job is easy, like I’m just sitting around watching people. But it’s a lot more complicated than that. You’re helping people achieve independence.”

Shai’Vone continues, “The schedules aren’t easy to manage, either, but you do what is best for the people you support. I’ve had to change my schedule several times due to school and childcare. That’s a struggle. And you get emotionally attached. You know you shouldn’t, but it’s hard when you’ve been working with someone for a while. When a lady I worked with broke up with her longtime boyfriend, I felt that, too. It hurt me to see her hurting. I wanted to say to her, ‘I feel your pain.’”

When Shai’Vone reflects on her journey as a DSP, a few things stand out. “I want people to know that the people I support are just like us. They have hopes and dreams just like we do; they may just need a little support getting to where they want to be.”

She also recognizes how challenging this can be. “I think the toughest part of my job is being misunderstood. Sometimes the people we work with are worried that you’re there just to boss them around, but you’re there to help them succeed.” She elaborates, “It’s not easy coming into someone’s life. Most of the time we are the only ones there for them. Many people don’t have families, so we take on all kinds of roles. We are it for them.”

Shai’Vone also says she would remind DSPs who are just starting out that it takes time to “build that trust and the relationships with the people you support. Remember, they have so many people coming in and out of their lives all the time.”

To this point, there is a slew of data to back up Shai’Vone’s wisdom. Nationally, the average turnover for DSPs is 40%. This can be devastating to people with disabilities, as they continually make connections, only to have those relationships broken when a DSP must leave. For most DSPs, the decision to leave is solely a financial one. DSP positions are state and federally funded, often barely above minimum wage, despite the complex skills required.

Comparatively, Penn-Mar’s turnover hovers around 25-30%, in large part due to retention-focused programs like Career Ladders. But Shai’Vone also credits this to the culture. “Penn-Mar really is one of the best companies I’ve worked for. They’ve taught me a lot; Career Ladders has taught me so much about how I approach things. And Penn-Mar is so supportive of their employees and different situations we might have.”

Clearly, people like Shai’Vone are a critical part of creating that culture. “This job can be really tough, but it’s rewarding at the end of the day. If you love helping people, and making a difference, then this is a great career.”