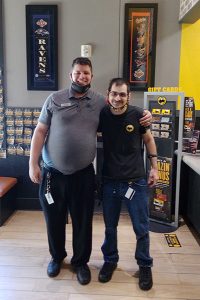 If you love chicken wings and sports, chances are you’re a fan of Buffalo Wild Wings, or “B-Dubs,” as diehard fans know it, the largest sports bar brand in the United States, founded in 1982, with a global footprint of 1,200 restaurants in 10 countries.

B-Dubs is not only known as your front-row seat to televised sporting events, for its welcoming neighborhood feel, or, of course, for its 21 signature wing sauces and seasonings, it also has a reputation for being a great place to work. Just ask Derek Hamburg, who has been working at B-Dubs on Englar Road in Westminster, Md., for almost five years. Or Jordan Ketterman, who started at the restaurant three months ago and said he’s been made to feel like part of the family.

“What’s special about working at Buffalo Wild Wings is the bond I have with everybody I work with there,” said Derek, who when not working is active in Special Olympics, public speaking and working on launching his own sports podcast.

Landing his job at B-Dubs was a dream come true for Derek as it combined his longtime passion for sports and his love for being around people. It was also a place he’d visited often with family and friends, and where 12 years ago he first met Janette Eckard, who goes by Jenn, the restaurant’s Hospitality Manager, who remembers him coming in to watch his favorite sports team the Ravens.

For more than six years now, Derek and Jordan, who have intellectual disabilities, have been receiving Customized Employment (CE) and Personal Supports through Penn-Mar Westminster (formerly Change, Inc. which joined the Penn-Mar family in 2019). It was around the time Derek came to Penn-Mar that the Employment team had approached Buffalo Wild Wings about possible job opportunities. The CE program and its specialists work to establish relationships with community businesses and connect them with the nonprofit’s job seekers – matching an employer’s needs with the talents, skills, and goals of a prospective employee.

Jenn recalled that it wasn’t long after that first meeting with the CE team that an opening became available. “We were looking for someone to help clean and prepare the restaurant for opening and help portion out appetizers in the kitchen,” she said. “So, I reached out back to Penn-Mar.” The rest, as they say, is history.

Since starting at B-Dubs, Derek has kept his same shift working Tuesdays through Fridays from 9 to 2 p.m. With Jenn’s support and encouragement, he’s taken on more responsibilities over the years.

“I help out any way I can,” said Derek. “I always check if there’s anything they need on the line.”

Penn-Mar Employment Specialist Tonya Stonesifer is impressed with how the restaurant has collaborated with Derek, and more recently with Jordan, who works Derek’s opposite shift Saturdays through Mondays. To fill Jordan’s position, Tonya said that Jenn contacted her asking if Penn-Mar had anyone else they could bring in.

“It speaks volumes to not only the relationship we’ve built with them, but the relationship they have with Derek to trust our agency to recommend another individual,” said Tonya. “It’s wonderful to have a company who wants to work with you.”

While Jenn has worked with Derek from day one, Jordan, who recently completed six weeks of intensive job coaching, works with B-Dubs General Manager Dustin Boutwell. “I love working there,” said Jordan. “It’s my new favorite place. We have a ball and joke a lot.”

Buffalo Wild Wings believes that “teamwork builds the foundation for a successful community.” The company has lived up to this belief by raising millions of dollars over the years through its foundation, its restaurants and community partners to provide kids with access to youth sports.

Tonya noted how B-Dubs’ teamwork ethic is evident in how closely they have worked with Derek and Jordan, and with Penn-Mar’s job coaches. “They’re invested in their jobs, their employees and the community. It’s a really good feeling,” she said.

“Derek is one of our guys. He’s part of the team,” said Jenn. “I don’t look at a person as having a disability. I feel like everybody has some form of a disability – whether you can see it or not. There’s no judgement on anybody when they come to work. It’s all about respecting each other. We don’t take each other for granted.”

For Jenn, who has worked in the restaurant and hospitality field for most of her adult life, businesses should look beyond when hiring.

“Everybody has an equal opportunity and can bring something to the table,” she said. “We all have challenges that could be hidden. We all should be given a chance.”