Brian Honeychuck: A New Member of the Sheetz Family - Penn-Mar 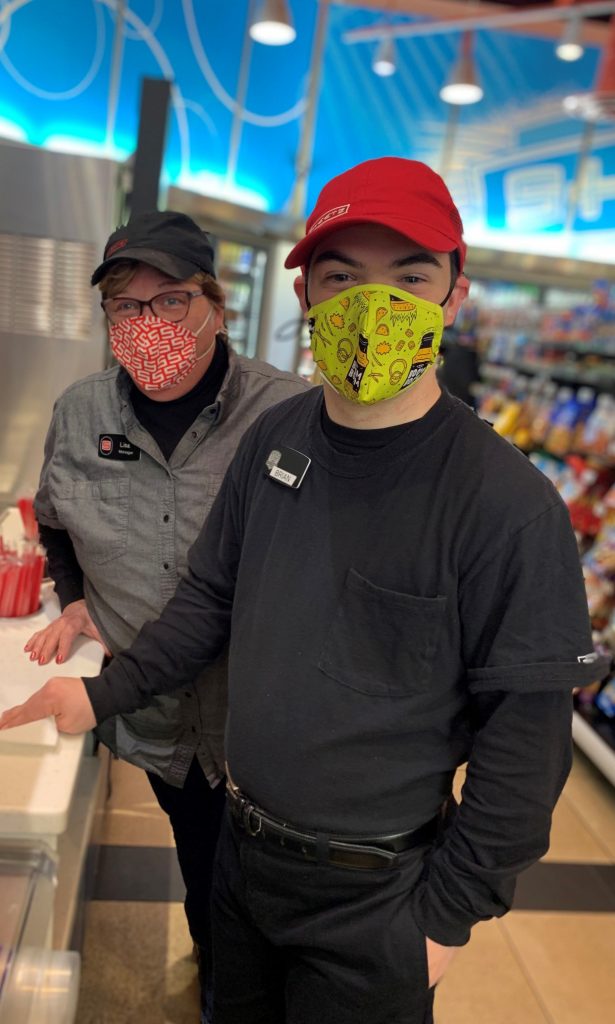 With two part-time jobs, steady volunteer work and transportation service at his disposal, Brian Honeychuck is relishing his newfound independence since recently moving to York from nearby Shrewsbury, Pa., with his parents Maureen and Joe. So much so that lately the youngest of four has been entertaining the idea of one day getting his own apartment. For the time being though, living with his mom and dad suits them all just fine. He still needs to save some money he said with a chuckle.

“I love getting those paychecks, but right now I save them and then spend them.” Some of those savings went into fixing up his bedroom this summer.

Brian, 23, who has Down syndrome, has only been earning those paychecks starting this past May, when he landed his first independent job at Books-A-Million (BAM) through Penn-Mar’s Customized Employment (CE) program. His positive attitude towards work and great work ethic has put him in excellent standing with his employers – a promising start to what no doubt will be long-term employment, a fulfilling career, and a chance to beef up those savings. In July he got his second job in York at Sheetz, the family-owned convenience store chain based in Altoona, Blair County, Pa.

After graduating from York County School of Technology (York Tech) in 2018, a school near and dear to his heart where he regularly volunteers in unified afterschool sports – “He might be one of Tech’s most enthusiastic alumni,” Maureen said – Brian was referred to Penn-Mar’s Customized Employment program.

Through CE’s Exploration and Discovery process Brian was able to begin connecting his skills, talents and interests with work-based experiences and job opportunities, the first of which was conducting custodial work with other program participants at local churches and libraries. That all came to a screeching halt with the pandemic, noted Maureen.

While COVID pushed unemployment to an all-time high, Penn-Mar’s CE team continued to work tirelessly to connect job seekers with customized employment opportunities in the community. Career Counselor Tricia Zeltwanger, whose primary responsibility is seeking out and establishing relationships with businesses in York County, and connecting individuals to jobs with those businesses, helped Brian secure the customized position sorting and shelving books at BAM.

Around the same time, Tricia was approached by Stephen Martynuska, a retired human services consultant who had been tapped by Sheetz to create an initiative to help the company enhance its hiring of people with intellectual and developmental disabilities (IDD) across their footprint of 600-plus stores in six states.

“I jumped right on board with this initiative,” said Tricia. “It’s a been a phenomenal opportunity to customize a person’s skills and apply them to a position with Sheetz. Tell me what you’re good at and we’ll figure out how to make that work inside this business.”

It was while Stephen was working as a customized employment consultant for The Arc of Pennsylvania in Blair and northern Cambria Counties that he contacted Sheetz in search of employment opportunities for people with IDD.

Good news came in the form of a return phone call from a friend of his in Sheetz’s HR department who told Stephen the company didn’t want to just hire a few people but wanted to hire people with disabilities across their entire footprint and they saw Stephen as someone who could help them do that. “The initiative is in line with Sheetz’s higher level strategic plan and policy of inclusion, diversity, equity and accessibility – IDEA. The company sees this group of people as a very viable workforce who can help meet their needs.” Stephen said.

“This was an over-the-top opportunity for me. To cap my career with a great organization like Sheetz to provide employment opportunities for people who live in our community, but once they become employed become part of the community has been a blessing.”

The pilot program temporarily titled Store Team Helper Hiring Initiative was launched in December 2019 in Blair County. When COVID hit the program was put on hiatus until June of the following year. In the meantime, news of the program was spreading, and Stephen was busy creating customized job descriptions and presenting to providers and employment agencies.

Lisa Reichow, Store Manager at Sheetz in York, who hired Brian, was the first outside of Blair County in the early stages of the pilot to hop on board. “I was so grateful to be a test for this program,” she said. “My nephew had gone to Penn-Mar, so it means a lot to me that people with disabilities are able to get jobs and feel like they’re giving something back – that they’re part of the community.”

Brian loves his job at Sheetz and the people he works with, and as Lisa shared, always comes to work with a positive attitude, great energy, and willingness to get started. “Brian gives 110 percent. He’s careful and wants everything to be perfect, and when he leaves it’s perfect.”

“Working at Sheetz is like a family – it has a very friendly family atmosphere,” said Brian, who works twice a week and is mainly responsible for stocking the freezers and refrigerators, as well as light cleaning and sanitizing. He also always has a ready smile and a wave for the customers.

“We’re thrilled that Brian is working,” said Maureen. “I think everyone wants to feel like they’re productive and have a job to do every day.”