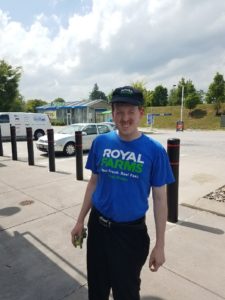 Curtis Brown is grateful to have kept working through the unprecedented Coronavirus recession that has seen the unemployment rate skyrocket across the nation. Typically, that rate is twice as high for people with disabilities, and in 2019, only a little over 19 percent of men and women in the disability community were employed.

What makes this recession different from others is that the Great Lockdown has put the vast majority of unemployed on furlough, which for everyone affected means they may be able to return to work as the pandemic diminishes and the economy gets back on track. This includes most of the more than 100 men and women Penn-Mar supports in careers in Maryland and Pennsylvania through its Customized Employment (CE) program.

“I know all our folks miss their jobs and can’t wait to go back,” said Heather Laser, Penn-Mar Employment Support Coordinator. “A lot of them have friends at their jobs and miss seeing people they work with. Now that things are slowly opening back up, we are hopeful that they can get back to work soon and get back to the lives they’ve worked so hard to establish for themselves in the community. They have all been handling it so well though through this crisis.”

Curtis, 25, of Phoenix, Md., who was diagnosed with autism at an early age, has been employed part-time at Royal Farms in Hunt Valley since October of 2018. The privately-owned convenience store chain, founded in 1959, and headquartered in Baltimore, operates more than 200 stores in Maryland, Pennsylvania, Delaware, New Jersey and Virginia, and is famous for its fried chicken. As a life-sustaining business during the shutdown, Royal Farms has remained open and its employees regarded as essential.

Following the strict health and safety protocols Royal Farms put in place at the onset of the pandemic, Curtis has been diligently attending to his duties in the store, namely stocking the refrigerators and shelves, and tending to the trash two days a week.

“This is his first paying job,” said Curtis’ mom Carol. “It’s been a great experience, but I have to admit we were a little apprehensive when we dropped him off for his first shift. It felt strange for us that somebody else was going to be taking care of him. It was an adjustment for all of us.”

Curtis graduated from Dulaney High School in Timonium in 2016, and its while there that he began garnering some work experience through volunteering at local grocery and clothing stores and restaurants, said Carol. Following graduation his parents enrolled him in an employment program run by the Maryland Department of Disabilities, but it wasn’t until he joined Penn-Mar’s Community Development and Customized Employment programs that his job prospects began to take off.

Through the CE program’s Exploration & Discovery process, and with the help of his dad David, who had worked for Royal Farms, Curtis eventually landed his current position at the Hunt Valley store. On-site job coaching, which lasted about a month, was conducted by Heather and Penn-Mar Career Counselor Anthony Bubczyk.

“Curtis is very, very smart – a quick learner,” said Heather. “He knows what he’s doing and does it well. He’s a vibrant, happy guy, who likes to talk to everybody.”

“I like working with people and having the responsibility of being depended on to do a job,” said Curtis, a huge model train buff with more than 300 trains and engines in his collection. Together, he and his dad built a train garden, complete with a town, farm, and mountain peak.

Stephanie Koltz, the store’s Team Leader, who started her career with Royal Farms three-and-a-half years ago, and only began to manage the Hunt Valley location in early March just prior to the lockdown, said that it’s been great working with Curtis, and although he’s probably a little thrown off by what’s going on in the world, he is managing very well.