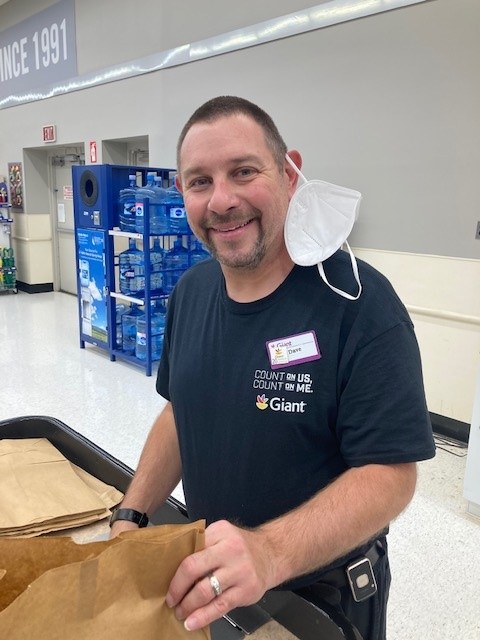 Dave putting in his final shift at the Giant supermarket in Westminster, MD on November 18th.

On November 18th, 2021, Dave Peak donned his Giant uniform for the last time. His final shift at the supermarket in Westminster, Maryland, was bittersweet for the 46-year-old Carroll County native. On one hand he was excited to be retiring after 25 years, and on the other, he was sad to be leaving his coworkers and customers whom he was going to miss, and who were going to miss him, his warm smile, and good-naturedness.

For Dave, the decision to leave his job as a bagger and greeter at Giant was an easy one however – his cerebral palsy was affecting his ability to stand for any length of time. His mother Margaret, aka “Bunny,” said that for Dave, standing for three hours was equivalent to anyone else standing for eight to ten hours.

“As I got older, it got more difficult with my legs,” Dave said. “I needed to leave before I ended up in a wheelchair.”

“We’re sorry to see him go,” said Giant Store Manager Jared Robinson. “Dave was very reliable. Everyone loved him. People went through his line just to see him. He was a great employee, and I told him that whatever job he looks to go to, I would be certainly happy to give him a reference.”

After graduating from South Carroll High School in 1995, where he was a popular student, Dave began receiving individual support services from Change, Inc., which merged with Penn-Mar Human Services in 2019. Around the same time, he met Tony Baer, a manager at the Giant Food Store in Eldersburg, who hired Dave and advocated for him on the job and within the company. Although Dave later transferred to the Westminster Giant, Tony, now retired, has remained an advocate and friend, and was among the well-wishers who turned up for Dave’s last shift this past November for a send-off party.

Also among those who gathered for Dave’s final day at Giant was Kris Froehlich, Program Services Manager for the Penn-Mar Westminster North Team. Kris has known and worked with Dave for most of her 33-year career, first with Change and now Penn-Mar, and said that he has a terrific work ethic that was inspired by his late father David Sr. and his mother Bunny. “He was surrounded by people who worked hard,” she said.

Given his independence, skills, and success on the job, Dave needed very little employment support over the years, except when issues or concerns arose due to scheduling or making certain accommodations. Getting to and from work fell mainly to, as Kris said, an incredible team of Direct Support Professionals who had to be flexible due to the changing week-to-week schedule. “They deserve a lot of credit for making his employment work through the years.”

An emotional send-off. Dave gets a hug from a coworker during his last day on the job at Giant.

We generally attribute success in our lives to hard work and determination, and to the people who have positively influenced and helped us along our paths. Kris assuredly ascribes part of Dave’s success to his strong natural support network of family, friends, and coworkers.

“Dave’s mom Bunny will go to the ends of the earth for him,” said Kris. “She’s so connected to him yet has that mindset, and always has, that Dave is very capable of having an independent life. She is so good at having the safety net there, but not getting in his way to let him fly and do his thing. She’s phenomenal.”

In addition, Kris said that coworkers at Giant always made Dave feel like an important part of the team. That he felt needed there, which allowed him to thrive.

It was faith, family and friends who helped get Dave and Bunny through the tragic loss of their brother and son Tim and father and husband David Sr. five years ago. Dave’s younger brother Tim died in a car accident and 31 days later David Sr. passed away from cellulitis, which Bunny believes was worsened by a broken heart.

“You never get over, especially the loss of a child. You learn to go on, but it’s never far from your mind,” said Bunny. “We are very, very blessed to have a wonderful support system. You couldn’t ask for a stronger, more wonderful group of people that we have in our lives.”

Helping Dave through the loss over the last year has been Penn-Mar DSP Phil Pascoe. Phil has been able to help Dave work through tough emotions and put some coping mechanisms in place. Together they attend church several days a week, where Dave has been able to take comfort in his congregation. He’s also started working out at Planet Fitness, in order to help strengthen his muscles.

At Dave’s side through it all has been the love of his life Natalie. Married 15 years, the couple live independently just around the corner from Bunny with their three guinea pigs. Natalie, who also receives personal supports from Penn-Mar, works at the Carroll Hospital Center, and when she comes home from work, Dave has dinner ready on the table. “We’re there for one another. We help each other out,” said Dave.

The send-off at Giant in November was an emotional one. Gathered were family, friends, customers, coworkers, and managers who had worked with him over the years.

“I had the pleasure of working with Dave for almost four years,” said Steven Sheppard, Giant Customer Service Manager. “In that span, I could always count on Dave to take care all of his customers as if it was his mother going through the check-out lane. During the pediatric cancer fundraiser, Dave would sell more coupon books than all the cashiers in a single day. He will be missed but never forgotten. I am grateful for having the chance to work with such a down-to-earth person.”

“I just couldn’t be more proud of Dave,” said Bunny. “Every year and every day was getting a little harder for him, but he accomplished his goal of putting in 25 years on the job at Giant.”

Dave plans to take a year off to build up his strength and then hopefully find another job, one preferably that entails sitting.

“I like having something to do,” said Dave. “I just want to keep moving.”