David Lindauer: One of the Team - Penn-Mar 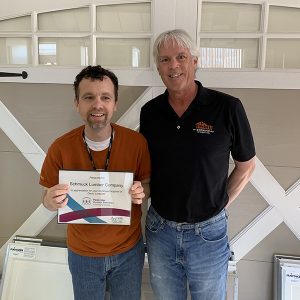 There aren’t that many businesses around that are still independently operating and thriving after 168 years. Among those rare establishments that are, is Schmuck Lumber Company in Hanover, Pa., founded in 1852, by Henry Schmuck.

While the COVID-19 pandemic has had a devastating affect on countless businesses, small and large, Schmuck Lumber is staying viable as an essential business serving builders, contractors, and DIYers in southern York County and northern Maryland.

How has Schmuck survived so long and grown? The answer is simple: “We care about our employees. I come to work each day for them, and they for me,” said Woodie Witman, who co-owns the company with Greg Livelsberger.

One of those employees is David Lindauer, a Penn-Mar Maryland resident since 2005, who was born with intellectual disabilities. He started at Schmuck in 2015, taking no time in becoming a valued member of the team of more than 60 employees. Out of concern for his health and safety, and that of his housemates, David is currently on temporary leave from his job, but very eager to get back.

“He’s one of us, and part of everything we do here at Schmuck,” Woodie said. “We miss him right now.”

David, 43, began his job search through Penn-Mar’s Customized Employment program in 2011. Through the program’s Exploration & Discovery process he worked with career counselors and job developers to pinpoint his skills, talents, and career goals, and help unleash his potential.

“The themes that came out of the E&D process included outdoor work, construction projects and recycling,” said Employment Support Coordinator Lila Barchey. “They matched up perfectly with the job he has today at Schmuck Lumber.”

Originally, the family-owned and operated company primarily sold lumber and coal, but over the years has grown to include a wide variety of building products and hardware supplies that they offer at their two locations in Hanover and Gettysburg. Part of David’s normal job is to unload and stock products, which Woodie noted he does very efficiently. In addition, he clears trash, keeps the break room, supply center and hardware store clean and dust free. 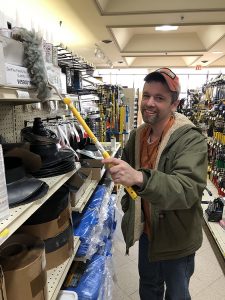 “David misses his job. It’s a happy place for him,” said Lila. “He works well independently and needs very little supervision. He has a great rapport with his coworkers, and they treat him as part of the family.”

As with many new hires, employers may have some initial reservations: Will the person work out? Will he or she fit in?

“Schmuck had the greatest intention that David would work out,” said Penn-Mar Career Counselor Anthony Bubczyk, who is close friends with one of the retired Schmuck Lumber partners, and has been following David’s career path. “However, there’s always a little hesitancy and anxiety when it comes to hiring any new employee. They were just very pleased that any reservations they had were immediately dispelled.”

“This is a company that is very much a part of the community, and they thought it was the right thing to do,” added Lila.

Woodie recalled that his initial response was “let’s do it,” but acknowledged that some folks were a little hesitant.

“As a business owner here, you can’t not want to give an opportunity to somebody else just because they are labeled with a disability. You’re hiring somebody who can bring something to the table, and I see it as an asset to the company, the morale, the people, and that’s the way we look at it.”

For Woodie it’s not about somebody’s disability, but about their ability. “I see that some people have certain talents, and other people have different talents.”

“David is so fortunate to have this opportunity to work at Schmuck,” said David’s mother Kathleen McMahon. “The company has provided David with the experience of genuine success that comes from working as part of the team. What an opportunity for a person with a disability to have such a great place to work with wonderful people. They’re so supportive of David.”

David’s father Jerry Lindauer couldn’t say enough about how his son’s life has been enriched by working with the team at Schmuck Lumber. “He’s made an incredible connection with everyone he works with. It’s been a really positive experience for him.”

A Ravens fan, among Steelers fans, there’s plenty of friendly ribbing on the job, and David, who always has a smile on his face said, “I really like the people there. I like to joke, and we laugh.”

“David’s a fun person to have around, and we’re looking forward to having him back as soon possible,” said Woodie. “He’s always upbeat, never in a bad mood. Never sick. Always gives plenty of notice for vacation. I don’t know what else you can expect from an employee. Any company that doesn’t focus on this type of program is missing out. That’s my opinion.”