Emily Finnegan: Discovering the Pathway to a Fulfilling Career - Penn-Mar 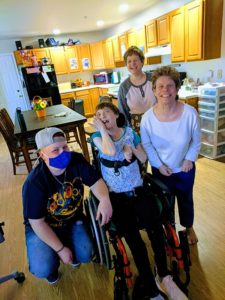 With the COVID-19 stay-at-home order still in place after more than a month, cabin fever has begun to set in at the Penn-Mar home in Manchester, Md., that Residential Supervisor Emily Finnegan oversees.

It’s safe to say that, to varying degrees, being cooped up at home is causing restlessness and irritability among us all. For some of us this has been a challenge, but Emily and Penn-Mar’s DSPs and team members in Maryland and Pennsylvania are coming up with ways to inject healthy fun, routine, and a feeling of safety and security to fight cabin fever for the hundreds of men and women the nonprofit supports.

“We’re trying to get used to the ‘new normal,’” said Emily. “We’ve begun Zoom meetings, cooking classes, coffee and dance clubs, door decorating and cake decorating contests, FaceTime calls with families. We’re making it work, instead of whining about it.”

When Emily, 29, joined Penn-Mar almost two years ago, she jumped into her supervisory role right away working with two independent gentlemen who needed little support apart from assistance with budgeting and transportation. She wasn’t a year into her new career as a DSP when she made an ambitious move and applied for a Program Manager position that became available. She was told she needed more experience and qualifications under her belt to manage multiple residences and the medical needs of individuals. As luck would have it, her current position working with four women fell into her lap.

Change is never easy, but easy is what Emily’s former occupation as a restaurant manager had become after 12 years working in the industry.

“I got to a comfortable place in my career in restaurant management, but I found it routine and realized I didn’t want to live my life that way – I didn’t want easy,” she said. “So I asked myself what’s the next step. Let’s see what I can learn.”

On a whim she enrolled at Carroll Community College (CCC) in pursuit of an associate’s degree in psychology. While taking a mental health first aid course, she asked several of the instructors, who worked for the Carroll County Health Department, how she could gain some experience in the field before completing her degree. They suggested she look into being a DSP, a profession she had never even heard of before. She researched the role and applied for several positions. Penn-Mar, she said, was the highest ranked of all the places she applied.

Her interest in psychology and what makes people tick was sparked at an early age. When she was a child growing up in Carroll County, an older cousin with intellectual disabilities, who has since passed away, lived with her and her family.

“I didn’t understand what an intellectual 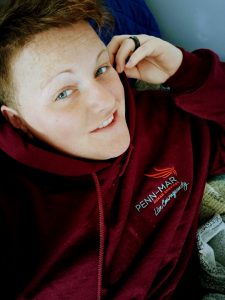 disability was at the time. I also later knew people who struggled with drug addictions,” said Emily. “I became curious about the human brain, and why serious addiction was happening with some people and not with me. What’s different?”

At CCC, Emily took various courses on substance abuse and disabilities and began delving into the neuroscience of the brain. Through a scholarship she received through a CCC Honor Society she belonged to, she was accepted into DeSales University and is currently pursuing her bachelor’s degree in psychology.

In addition to working full time, and getting her degree, Emily, who lives in Red Lion with her girlfriend Kimberly, is also in Career Ladders, Penn-Mar’s DSP career development and credentialing program. She enrolled last August, and is slowly but surely making her way through the rigorous program.

Working with the “ladies,” building relationships and helping them achieve their goals has been very fulfilling for her. Drawing on her past experience in management combined with her new role, she feels it’s her job to empower people to learn, become independent and grow, not only the women she works with, but her team as well.

“I’m so grateful for my staff who are pulling out all the stops to ensure that everyone is safe, occupied and thriving in the home,” Emily said. I’m also lucky to have the expertise of two Day Program staff members involved in the day-to-day activities as well. Their presence is adding a fresh set of eyes in the house, and the experience has brought us all closer, with the residential and day programs coming together in this crisis for everyone’s benefit.”