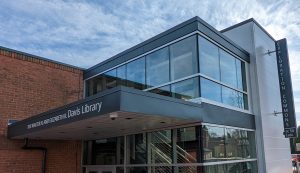 The entrance to Carroll County Public Library’s Exploration Commons at 50 East, which opened to the public on December 17th, 2021. (Photo: CCPL Staff)

As a community hub and resource for learning and literacy Carroll County Public Library (CCPL) is ahead of the curve. On December 17th of last year, CCPL officially opened the cutting-edge makerspace, Exploration Commons at 50 East, the first in Carroll County, and one of only a handful of public facilities in Maryland (aside from hospitals and nursing homes), nay the country, to have an adult changing station for people with disabilities.

Accessibility and inclusion are hallmarks of the Americans with Disabilities Act (ADA) of 1990, and although people with disabilities enjoy ever greater access to employment, programs and services, and public accommodations, barriers remain that prevent them from fully participating in their communities.

For the disability community, these barriers, such as a lack of public adult changing stations, and other amenities, pose a challenge as the country pushes away from institutional care – that today includes traditional day services – to home and community-based services, and person-centered supports.

This national transformation movement, endorsed by the Centers for Medicare and Medicaid, to help people live their day-to-day lives as thriving members of their communities is an exciting one, but as Jennifer Mettrick, Penn-Mar Human Services’ Chief Strategy Officer, said, “It has been a struggle for many providers in the face of an ongoing workforce crisis, a pandemic, and at the onset of the movement, finding ways to safely support and integrate people more into their communities.”

“From the start we asked ourselves, ‘where can the people we support positively interact with others, their nondisabled peers, and make sure that it’s meaningful?’” said Jennifer, who was the former Director of Operations for Change Inc., in Westminster, before it merged with Penn-Mar in 2019.

Enter Exploration Commons, whose conception, planning and design took into account the needs of the Carroll County community and its constituents. 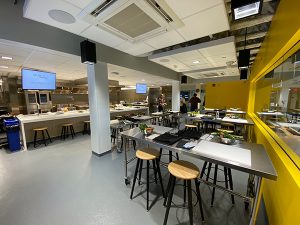 The makerspace concept sprung from hackerspaces that emerged in Germany in the mid-90s as places where computer programmers met to share resources and “hack” technology. Today they have evolved into collaborative DIY spaces in community centers, libraries, and universities where people of all ages gather to make, invent, learn, and share. 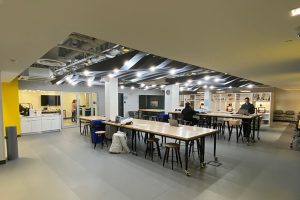 The open makerspace with Fabricator Room in the background. (Photo: CCPL Staff)

As makerspaces go, CCPL’s Exploration Commons is state of the art, equipped with, among other things, a commercial kitchen, an AV lab, meeting rooms, 3D printers, laser cutters, scanners, numerous software programs, as well as sewing machines. Use of the facility is free to the public, with minimal costs for certain materials, and programs.

Funding for the project, which cost more than $5 million, came from a state capital grant, Carroll County, as well as fundraising efforts by CCPL.

According to Bob Kuntz, CCPL’s Director of Operations and Innovation, the idea for Exploration Commons came out of futuring discussions held in Carroll County between 2013 and 2016.

“One of the things we heard coming out of those discussions was that the community was looking for access to technology, more meeting space, and access to a kitchen where people could take classes,” said Bob.

Since the Westminster branch happened to have 14,000 square feet of storage space that could be repurposed to meet the community’s needs, the possibility for a makerspace took hold. Starting in 2017, CCPL began conducting community focus groups to determine how the space should serve the public, and by 2018, design of the makerspace began, along with another round of focus groups.

Bob, who then served on Change’s board of directors, invited Mike Shriver, Penn-Mar’s Director of Consulting, who was Change’s CEO at the time, to participate in the design focus groups, which consisted of the CCPL team, architects, and a cohort of library advocates, community members, and nonprofit organizations.

“Bob knew that part of our strategy to support people in the community was rooted in the ability to find partners who we could leverage for the use of space like the makerspace and others,” said Mike. “At the time most of the individuals at Change who were transitioning to community-based supports regularly used the Westminster Library, attending programs, and other activities.”

Participating in the makerspace design, along with other Carroll County human service providers, gave Mike and the group the opportunity to contribute their feedback, thoughts, dreams, ideals, and ways the space could benefit the people they supported.

The Changing Table, located in the family restroom, allows people with disabilities to tend to their personal care needs without leaving the makerspace. (Photo: CCPL Staff)

It was during those design focus groups, and subsequent discussions among Change staff that the idea for an adult changing station was proposed.

“I vividly recall our team member Victoria Blankenship approaching me with the idea of an adult changing table that she had been researching,” said Mike. “One of the barriers for people being integrated into the community who have significant medical, physical, or intellectual support needs, is access to restroom accommodations throughout a given day.”

Mike took the idea to the focus group, who, he said, latched on to it. “It was early enough in the planning phase that the architects could incorporate it into the design of the facility’s family restroom and have it be accessible according to ADA requirements.”

“People with disabilities in our community who use Exploration Commons, now have the ability to come in here and not have to leave the premises or a program in order to take care of their personal needs,” said Bob, who noted that funding for the changing station came from one of their donors.

Response from the community since the makerspace’s opening a few months ago has been overwhelmingly positive, with classes and workshops filling up quickly.

“We’ve really been making an effort to think of ways to make it an accessible space and also an inviting space for everyone,” said Jen Bishop, Exploration Commons manager. “People are very excited to come in, utilize the many resources we have, and pursue their passions while learning new skills.

Among Exploration Commons’ resources is workforce development, which for Penn-Mar and its Customized Employment team is a boon in helping people they support discover, learn, and acquire job skills that could lead to employment in the community.

Penn-Mar Senior DSP Court Dudek has visited Exploration Commons several times with Joe Walsh, a gentleman he works with who is interested in technology and particularly CNC routing – a computer-controlled cutting machine. “Joe took an intro course to CNC routing,” said Court. “It was a challenge, but he wanted to learn something technical and to see how routing is done.”

As a job coach and developer, Court said that the resources are an ideal steppingstone to understanding and learning a trade, and the kinds of employment opportunities that are out there.

For Mike, the entire Exploration Commons design experience has been a perfect example of how listening to people in the spirit of collaboration changes a community for the greater good.

“Something we talk about in our industry is the notion that if we could only get involved and become integrated into the design process when its conceptual, we can help community partners ensure that they are creating an accessible environment for anyone with a disability.

It wouldn’t have happened if it weren’t for Bob and his strength and vision in terms of seeing what we were saying and being the champion for it.”

There is currently a bill under consideration in the Maryland Senate, the SB435, also known as the Maryland Makerspace Initiative Program, which aims to support organizations and local governments that want to open and operate makerspaces.

HB10/SB44: Public Buildings – Changing Facilities – Personal Care for Adults (passed in the House, no committee vote in the Senate) – This bill would have required a changing facility suitable for providing personal care for an adult to be installed in at least one public restroom within a public building renovated or built on or after October 1, 2021. Source: Maryland Developmental Disabilities Council