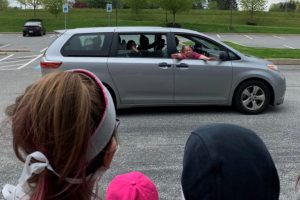 This past March, as the coronavirus was taking hold of the nation and world, Lesha Breighner, a longtime Penn-Mar resident, with the guidance of Lisa Hartley, her home’s Residential Supervisor, decided that it would be most prudent for the safety of herself and her housemates that she take a temporary leave from her job at UPMC Specialty Care Gastroenterology in York Pa.

What Lesha and her coworkers didn’t realize at the time, was just how much they were going to miss each other.

Lesha, who was born with Down syndrome, has been working part-time at UPMC Specialty Care Gastroenterology (formerly Gastro Associates of York) as an office assistant for the past three-and-a-half years, and although some of her responsibilities have changed over time, her love for her job (as well as paycheck, as she said), and her coworkers have remained a constant.

“Lesha is always very eager to go to work and loves the atmosphere and people at UPMC” said Margaret Markline, Penn-Mar Employment Support Coordinator, and Lesha’s job coach. “She is outgoing, spunky, happy, encouraging, and she brings all that positivity to her job every day.”

Taking the short leave from the job and coworkers she adores during the height of the stay-at-home order was not easy for Lesha, as Lisa Hartley attested: “We’ve been trying to stay as busy as we can during the lockdown, and though all the ladies here at the house miss their routines, Lesha might have had the hardest time of it, because she missed her job and her friends so much.”

It is said that absence makes the heart grow fonder, this was certainly true for Lesha and her colleagues alike. While on leave, Lesha stayed in regular contact with her friends at work, and with her supervisor Kathy Becker, who is the practice’s Administrative Assistant, and also oversees the medical records department.

“Lesha let me know often, when she was out, how much she missed us,” said Kathy. “Everybody loves her here. On a typical day, when she comes in, she goes around and says hi to everyone. We all enjoy seeing her smiling face and we missed her too.”

On one particular Monday in May, during her leave, Lesha and Kathy were FaceTiming, and like she had started to do weeks prior, Kathy held her phone aloft and took Lesha around the office to say hi to everyone. While they were chatting, it occurred to Kathy that it would be great if Lesha could come out to the practice so they could all see her and wave to her. She contacted Lisa, who thought it was a wonderful idea. So began plans for the drive-by parade.

Kathy alerted staff and the departments of Lesha’s pending visit and someone suggested they make signs. “I had no idea the effort everybody was going to put into making signs for Lesha,” she said.

Lisa, meanwhile, let Lesha know of the plan to visit the practice. “I played it down and said that we were going to do a quick drive-by the building.”

On the designated day of May 14th, Lisa gave Kathy a heads up that they were on their way, and along with Penn-Mar residential staff Lizzy Bowman and Essence Kehr, as well as Lesha’s housemates Patty, Heather and Bobbi, they hopped into the van and headed to Lesha’s workplace.

“Before we even turned into the parking lot, Lesha saw everyone outside with their colorful, beautiful signs and burst into tears. She was so happy,” Lisa said. “Suddenly there wasn’t a dry eye in the van.”

“Lots of smiles and happy tears,” said Kathy. “Everyone was outside waving and holding up their signs as Lesha drove around the building.”

“I was so surprised,” said Lesha, who with Lisa and housemates were moved to tears all over again when Kathy later dropped off all the signs that she had collected from staff.

Since June 15th, Lesha has been back at work, Monday to Friday, from 1 to 3 p.m., and needless to say is loving it.

“They were really happy to see her on her first day back,” said Margaret. “It’s a really great group dynamic there for her.”

Lisa agreed and said “I think the success of a job depends a lot on the people you work with and how enjoyable the experience can be, and I think Lesha has the best experience. Penn-Mar did a wonderful job of matching her up with work she enjoys and people she loves being around.”