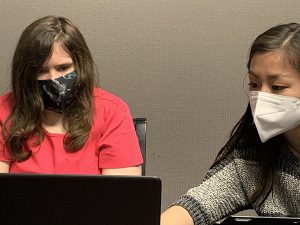 Megan Holt (left) and Penn-Mar Senior DSP Sabrina Pawlus on an assignment at the Carroll Nonprofit Center in Westminster, MD.

One of Megan Holt’s greatest joys is checking off tasks on her to–do list. The satisfaction she gets from completing an assignment always prompts a radiant smile on her face, or maybe even a hug for Penn-Mar DSPs Sabrina Pawlus and Joyce Silfee, who have been working with Megan in providing person-centered community and employment supports for a little more than a year now.

Megan, 23, from Eldersburg, Maryland, is on track to one day securing a job and experiencing the rewards of earning a paycheck. Meanwhile, though, she’s putting her skills to work, and learning new ones, volunteering two days a week at The Opus Community Music School and Visiting Angels, a provider of home care services for seniors.

A reader who loves solving math problems, Megan’s intellectual curiosity and great proficiency with computers and typing, among other talents, defy the stereotypes of someone who was born with autism, who is mostly nonverbal, and who has obsessive compulsive disorder, a condition that drives her laser-focused organizational skills and need to put things in their proper place.

After graduating from Liberty High School in Eldersburg and completing a two-year post-secondary program that included work experiences, Megan enrolled in Penn-Mar’s Community Development and Customized Employment programs, and also began receiving personal supports. Her parents Sandy and Robert were familiar with Penn-Mar through their more than 20 years of involvement in Maryland’s disabilities community.

For many years, Robert has served as treasurer on the board of Spectrum Support, Inc, and for 15 years, while Megan was in school, served on the Special Education Citizens Advisory Committee, a special education ad hoc committee to Carroll County Public Schools made up of administrators, teachers, agencies, and parents. For Sandy and Robert, Penn-Mar was the next step for Megan on her journey to one day acquiring a job and as Robert said, “becoming a productive member of society.”

Pamela “Ela” Wiswakarma, the Executive Director of The Opus Community Music School in Eldersburg, which was founded in 2007, has had the long-time dream of creating a functioning music library for the school’s students and faculty. That dream is taking shape today with the help of Megan, and on-the-job support from Penn-Mar Senior DSP Sabrina Pawlus. 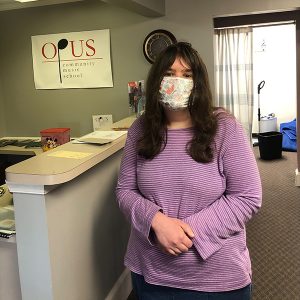 For the past year, Megan has been volunteering at Opus cataloging and entering books and thousands of boxed manuscripts into a database, applying her excellent typing, computer and organizational skills in the process. The work keeps her busy two days a week, on Tuesdays when she works from home and Thursdays when she goes to the school.

“Our mission is to enrich the community through music and high-quality lessons – to build community essentially,” said Ela, who taught music at the fully inclusive Australian International School in Jakarta, Indonesia. “So, we were thrilled when Megan wanted to participate and help us build our dream of having a library. We’re so grateful for the work she’s doing.”

Sabrina has seen a lot of growth in Megan since she began working with her. Together with DSP Joyce Silfee, they introduced sign language to help Megan better communicate her needs and wishes, and according to her mom Sandy, she’s been making progress.

“Megan can respond to you verbally, but only when she wants to, which is not a lot of the time,” said Sandy. “For the most part she will let you know what she wants, oftentimes by typing or writing it down.”

“I look forward to our time at Opus and the volunteer work she is doing there,” said Sabrina. “Megan is a happy person, very bright and a fast learner. She’s also a visual learner and enjoys having a process with a clear beginning and an end. She works best with a schedule and a structure to her day. It’s one way she’s able to communicate.”

DSP Joyce Silfee has been working with Megan since this past May when the chance to volunteer at Visiting Angels came up – an opportunity Robert was able to secure for his daughter through his 20-year involvement with the South Carroll Business Association and friendship with Marty Burns, the home health care organization’s Director. “Visiting Angels is all about helping people, so this just made it to be a perfect fit,” said Robert.

“When Megan puts her mind to something and it’s something she’s comfortable with and likes to do, she’ll do it,” said Joyce. For her time at Visiting Angels, Megan has been responsible for shredding documents and helping the organization catch up with filing. She’s the first volunteer they’ve ever had.

“We were really pleased that we were given the opportunity to work with Megan,” said Amy McColley, Visiting Angels’ Vice President of Human Resources. “She’s providing something for us that we would not be able to get to. She plays an important role in our family here.”

Sandy and Robert would love for Megan to have a job one day, a job that, as Joyce put it, plays to her strengths, of which she has many. They know that she would thrive in a position that provided a steady routine and a chance for her to express her independence. Through her work at Opus and Visiting Angels and the experiences she’s garnering, that day may be here sooner rather than later.