Scott Deise is no slouch. Sixty-five-years young, he’s one of the most active and hardest working people you’ll ever meet, who has no intention of retiring anytime soon from his six-day-a-week work schedule. 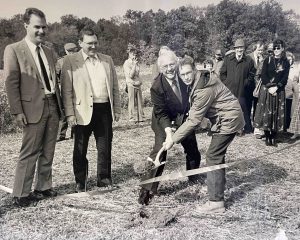 “I don’t know what I would do with myself if I retired,” said Scott. However, if you know him, you know that he wouldn’t waste a minute in finding something new and creative to learn or do with a gusto and self-determination that are the hallmarks of everything he sets his mind to achieving – like learning to play the violin, the keyboard and guitar, taking up western-style horseback riding, and golf, or making puppets and stages, and dedicating a room in his Freeland apartment to his model train collection and hand-built dioramas.

To a large extent, Scott is the embodiment of Penn-Mar’s mission. Not only is he a person with intellectual disabilities who has always lived his life courageously and independently, he is one of the nonprofit’s very first residents whose late parents Shirley and Charles were among Penn-Mar’s 12 founding visionary families that teamed up in 1981 to help their adult children unlock new opportunities for independence and community inclusion.

“I’m one of the originals,” Scott said proudly. “We started with three houses, and then we just grew and grew!” 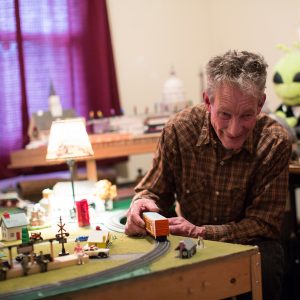 There hasn’t been a time in the 40 years since he’s been with Penn-Mar that Scott hasn’t worked or done something to occupy his days. As Residential Program Manager Alyssa Albright said, “If there’s one thing besides his creative and recreational activities that he’s dedicated to, it’s work. Scott needs to be doing something. He’s not one who is going to be sitting around watching TV.”

For the past eight years, Scott has been working at Gordon Recycling Services in York, Pa. He works Monday through Friday, from 9 to 2, and is responsible for operating the core stripper, a machine that trims rolls of paper for recycling. Every Saturday, he heads to the Home Depot in Shrewsbury, where he’s worked since 2011. Putting in a four-hour shift, Scott does everything from clearing aisles and collecting carts, to assisting customers with directions and even product recommendations.

When Gordon closed due to the pandemic lockdown, Scott was put on leave, but managed to pick up a lot of extra shifts at Home Depot, much to his pleasure, working as many as five days a week, for which they were grateful. 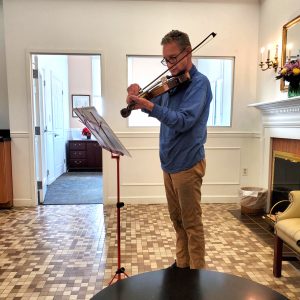 Multi-talented Scott Deise enjoying his interests in puppetry, the violin, and model trains.

“For months Scott was very eager to return to work at Gordon and kept checking to see when he could go back,” said Lila Barchey, Penn-Mar Employment Support Coordinator who oversees Scott’s job supports, which she says are very minimal given how independently he works. “He couldn’t stand not being busy. I don’t think he ever stops moving.”

“Meticulous,” is how Scott’s boss Jason Faus, Plant Manager for Gordon Recycling Services in York, describes Scott’s work ethic. “He pays attention to detail and really takes pride in what he does. He’s not lazy and doesn’t cut corners. Whatever he does, he does the right way, and won’t hesitate to let anyone know if they’re doing something the wrong way.”

Scott’s talents beyond work are many. When he isn’t putting in his hours at Gordon and Home Depot, you’ll find him working on any number of projects and interests at home. He recently installed a kitchen backsplash, and during the pandemic built a cat condo for one of the residents. He maintains the lawn and will help his housemate Robert Zerance with any repairs that need to be done in his apartment.

“He is never idle,” said Penn-Mar Residential Supervisor Robert Wise, who’s been working with Scott for the past two years. “He loves working with his hands and is very creative.” 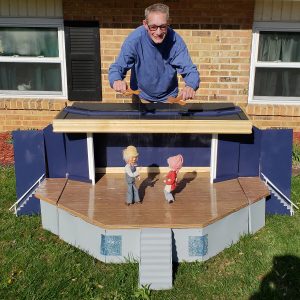 For years now he’s been making puppets and building stages from recycled cardboard, and before COVID would put on shows for other Penn-Mar residents. He also has an extensive model train collection and dioramas that he’s built and spends time enhancing.

Three years ago, Scott took up the violin and continues to take lessons. At a Gordon July 4th cookout this past summer, Scott regaled his coworkers with a violin rendition of “America the Beautiful,” and has on occasion played “Happy Birthday” for his supervisors at Home Depot.

What can’t Scott do? He’ll probably tell you “nothing.” That there’s nothing that grabs his keen interest that he doesn’t give his all to try to master to a great degree.

“He’s very proud of the things he’s accomplished in spite of having a disability,” said Alyssa.

“I just like to be busy and whatever I do, I want to make sure I do it right,” he said.